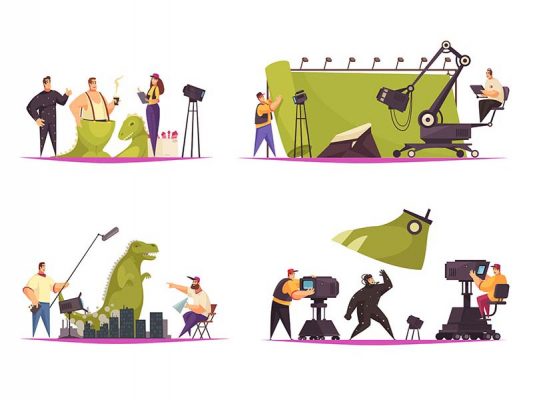 Often the first deliverable in the production of a video, the script and scene direction are highly important — and interdependent. First, some quick definitions:
Script: Voiceover and/or onscreen text
Scene direction: Written descriptions of what will be shown on-screen during each part of the script
Since the content and storyline are the backbone of any video or motion graphic, it’s best for scripting and scene direction to be a highly collaborative process.
The team producing the work will need to elicit feedback from key stakeholders on the client side. They’ll also probably involve as much of their own production team as possible during this phase. That means getting designers, content writers, researchers, animators, and project managers all in one room to brainstorm and plan. This approach ensures that the storyline touches upon key messages, is engaging, and plays well with the design and animation styles to come. 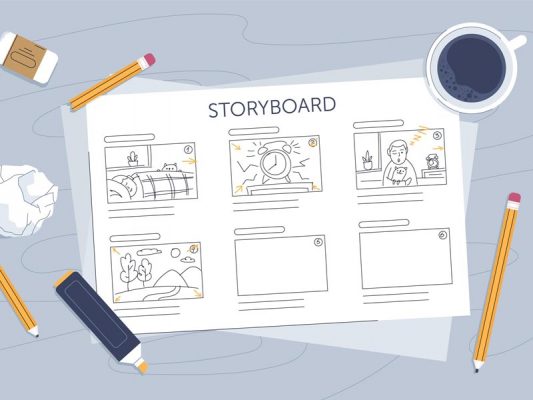 Upon approval of the scripting and scene direction, the team moves on to storyboarding. In this phase, the script and scene direction are combined with sketches that help bring them to life.
Depending on a number of factors, including budget, timeline, and chosen production process, the sketches may vary in complexity. They may be displayed scene-by-scene alongside the script and scene-direction notes. Or they may be animated, with very rough cuts of sound direction and/or voiceover to show timing.
Likewise, in some scenarios, this may be the first time that key art direction elements like colors, fonts, and illustration style are proposed — unless those decisions were established upfront.
In whatever form it takes, the storyboard gives the team something visual to react to. It ensures that the scene direction described in the previous phase is fully getting its message across. What’s happening on-screen is essential to telling the story in a way that engages your target audience — and you must keep them top-of-mind when reviewing. Personal preferences can come into play when reviewing any deliverable. But at the end of the day, your motion graphic needs to resonate with your audience more than anyone else.
As is the case at the scripting stage — and every stage in the motion-graphic production process — you’ll probably want to revise your storyboard at least once based on feedback to make sure you’re on the right track. If feedback is minimal, you may be able to move straight into the artwork phase, and incorporate feedback then.

3. ARTWORK
Developing the artwork for a motion graphic is generally more time-intensive than any of the previous steps on their own. All the revisions and approvals up to this point — on script, scene direction, sketches, and art direction — have ensured that the project is on the right path. Together, they add up to a sign-off that the team can now invest significant time into production.
Whether your creative team delivers 1 fully illustrated scene for you to give feedback on, more than a few, or the complete set of artwork for your motion graphic will be determined by many of the same factors as your storyboard’s format. No approach is wrong, so long as it’s thoroughly communicated and understood by all parties.
That’s because once your motion graphic enters animation, any changes to what’s being shown will require not 1, but 2 time-consuming stages of editing: artwork edits, then animation edits. This can compromise deadlines and budgets. So always ensure that the artwork for your motion graphic meets your benchmarks for success before giving the thumbs-up to start animation. 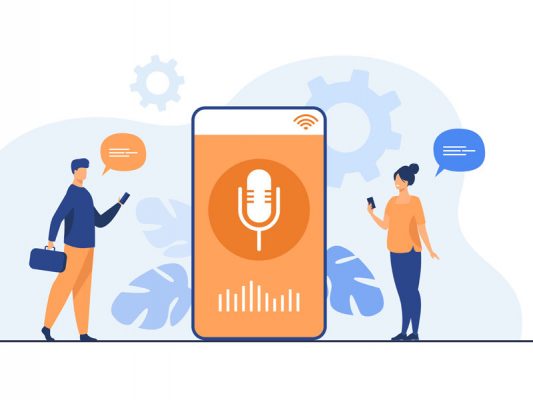 Visuals aren’t the only component of your video. The script developed at the start of the production process will often include a voiceover. This isn’t always the case — if your video is being developed for viewing on mute, the words may be communicated as on-screen text instead. But if your motion graphic is designed to be played with the volume up, a recorded voiceover may be 1 component of the sound in your video.
Selecting the right voiceover artist is critical to perfecting the overall tone of your video. The voiceover must appeal to your target audience, and it must match the art direction — which was also tailored to that audience. Should the narration of your story be lean and professional, or whimsical and exciting? Should you opt for a youthful sound, or a mature voice? Low tones or high tones? Your production team will lead the way in sending you only the examples that will appeal to your audience, so that you can make an informed choice.

5. ANIMATION
The animation phase is the final step in the visual design of your motion graphic. By this point, you’re confident and excited about the script, scene direction, art direction, and artwork.
Among the most commonly requested elements to include in motion graphics is character animation. Some illustration styles are suited to character animation, but others are not — so whether you’re going to include animated characters must be decided early on. Your production team should discuss options for this with you at the style guide and/or storyboard phase, and again as artwork begins. Moving from a style that doesn’t support character animation to one that does will definitely increase budget if it’s not requested until the artwork stage or later. Again, the team you’re working with should discuss all of this with you as early as the kickoff and/or scripting stages.
As you watch the artwork come to life in animated scenes, you can suggest a variety of changes. But when you’re not an animator yourself, it can be difficult to know which changes are relatively easy to make, and which are more involved. Ask your creative partner to explain the scope of different types of changes so you can stick to your timeline and budget.

6. CUSTOM SCORE AND SOUND DESIGN
Up to this point in the process, your motion graphic has a carefully crafted script and scene direction, custom-made artwork, and unique animations. So why spoil all that custom work with stock music and uninspired sound design?
Your score and sound design should punctuate and emphasize your message. Even if your video will often be played on silent (such as at an expo booth), if it will ever be viewed in a sound-friendly setting, these custom details will only enhance the impact. A disharmonious score and clunky sound design are far worse than no score or sound at all.

7. The Final Product
Whoo Hoo! The design is complete. It’s time to get the final files and put the designs into action. Over time, you’ll be able to scale your design process effectively.